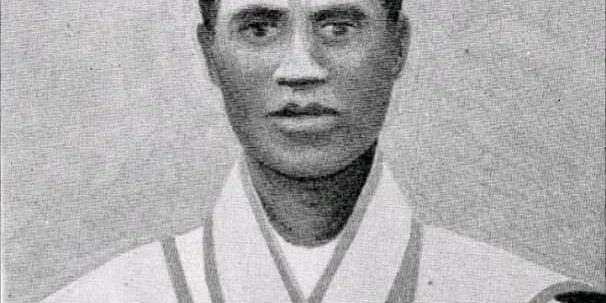 Paul was born in the year 1888 in a town called Ezi, about 45 kilometres from Asaba. At the time, a catechist living in Illah visited the town from time to time. When Paul was about nine years old, the catechist asked Pauls father if he would leave Paul in his care. After considering it, his father granted the catechist leave to do so. The catechist took care of Paul for six months and then confided him to Fr Frigerio who sent him to Asaba to become a student in the catechists school in 1898. Paul was baptised in 1898. His father was baptised on his deathbed. This led 16 members of his family to convert some time later.

On finishing his studies, Paul was employed as a schoolteacher in the Illah mission, where he worked for two years. He left the mission in 1905 to work for the government and later for a merchant far from home. He wanted to earn more money to take care of his widowed mother. However, he became lax in the practise of the faith. After working for a year, he was accused of fraud and jailed. Providentially, his jail was in Asaba, close to the Catholic mission. Every day, he heard the toll of the church bell, calling the Catholics to prayer. There he made a firm decision to return to the mission as soon as he got out of jail. However, when he got out, he first worked for another merchant in Asaba for about a year, frequenting the mission. After speaking to Zappa, he returned to the mission to work as a schoolteacher in 1907. The following year, he told Zappa that he felt called God was calling him to the priesthood.

Zappa permitted Paul to be lodged in the mission. He moved from one district to the other teaching English to the children. After six months, he reiterated his desire to become a priest. Hence, he started studying Latin. He learnt Latin while working in three different districts in the mission. He also helped give catechism classes. In 1911, Zappa considered him ready to start philosophy. He showed great aptitude for it. However, many did not believe he would persevere, due to previous experiences.

On 14 January 1914, he received minor orders. He was expected to receive the sub-diaconate in 1915 but the First World War disrupted his studies. Many of the missionaries were called to the front, including the priest in charge of the seminarians. While the other seminarians dispersed, Paul continued faithful to his calling, helping the remaining missionaries in different mission stations. He resumed his studies at the end of the war. On Zappas death, the new mission head, Bishop Thomas Broderick, wanted him to continue working as a teacher in the mission school while studying for the priesthood. On 15 June 1919, he was ordained a sub-deacon and on 26 October 1919 deacon. Bishop Broderick ordained him a priest on 6 January 1920. Paul was not only the first priest in the Vicariate of Western Nigeria. He was also the first priest from all the missions entrusted to the SMA, which comprised almost the entire West African coast, from Liberia to Nigeria.

LETTER TO THE TROUBLED CHRISTIAN: COVID-19 AND THE THREAT TO FAITH
April 6, 2020
Search
Recent Posts
FROM OUR GALLERY